The Seychelles National Museums Division falls under the aegis of the Ministry of youth, Sport and Culture and is responsible for the continuous preservation, promotion and development of Seychelles cultural heritage. 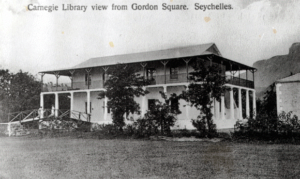 perennially interesting objects, such as portraits of Governors, shells, corals, handicraft a few photographs and a few paintings- with the piece de resistance being of course, the 1756-52cm Stone of Possession.

It was a retired officer of the Indian Army Captain Archibald Tindall Web (1889-1968) who initiated its creation. In 1961, when he was appointed the first Government Archivist, Webb developed a passion for the history of Seychelles. Having so many old documents at his disposal. He eventually produce in 1964 “The history of Seychelles” the proceeds from the sales of which went to Museum Donation Fund, opened with Barclays Bank.  By 1967 the sum had reached Rs 3, 350 and the Museum was gradually growing to become Victoria’s greatest attraction for foreign visitors and local residents especially students. More objects had been added. These included: a drawing of a disused watermill at Cascade, 2 polished coco de mer nuts, an old canon ball and a painting of a local creole house, donations from the public who was keen to see that Seychelles had a Museum which would be worth the name.

During the year 1968-1969, 2,010 persons signed the visitor’s book. The Museum was a combination of natural history specimen and historical artefacts. In 1971, an Entomological Section and a Concho logical Section were established. It must have been quite an engrossing accumulation of assorted things in there: marine mollusk in glass boxes, stick insect, butterflies, old bronze Portuguese swivel guns raised from an unidentified wreck off Admiralties, a giant Crown-of-Thorn starfish, a giant fur below clam, a German soldier’s helmet, a giant tortoise (stuffed of course) and even a blue ensign flag carried by Seychelles pioneer contingent during Victory Parade in London on 8th June of 1946.

Exhibitions and educational programmes have always been the museum’s main activities to attract public interest and enlightened them on various aspect of our lives. – But the museum being the repository of a nation’s, historic, artistic, scientific and educational heritage has the duty to educate the nation about various aspect of its social history. A museum exhibition on the everyday subjects can be a fascinating exercise in informing the general public of what the Seychelles civil society have experienced during the last fifty five years since the existence of the National Museums

During the 1970’s, the Seychellois Curator of the Museum was J. Henri Macgaw (1929-2010) who was also the Archivist. The archives Repository, a central Record and a Reading Room for Researchers were located on the ground floor of the same building. Therefore, it was painfully obvious that both departments were functioning under restricting conditions, in such confinements. Even the statuette of the diminutive Empress Victoria which the Museum had acquired in 1977 had taken too much precious space! In the early 1980’s when the Archives moved into the La Bastille building at Union Vale, the Museum Sections spread out on the entire ground floor. It was in the 1996 that the Museum separated into two Sections and became two separate museums. The National Museum of History moved into the old government secretariat (1903) on State House Avenue leaving the entire Carnegie Building for the Natural History In 2004, the precious Pierre de Possession had to be budged again, when the museum moved into the splendid edifice National Library (1994).

The Natural History Museum acquired more objects and added more Sections, such as one on the geology of Seychelles where visitors can marvel at the different varieties of our granites. Here, they learn how the dyke (ros leskalye) at Port Launay was formed as a result of igneous intrusion ‘, and also about other mind boggling geological features of Seychelles. The dioramas of a mist forest, mangroves swamp and that of ocean life were the attractions that put the visitors of halt for hours.

The National Museum of History also acquired new (but ancient) objects. In 1985, a school teacher (a Lady) of Baie Lazare found a few fistfuls of gold and silver coins. They are kept in covered human bones at Anse Lascars on Silhouette Island, and in 2012, the staff of the National Heritage Research section carried out a minor excavation study at the site of Venn’s Town (1875)  at Sans souci, and they found an empty bottle of wine, , a few copper spoons and a couple of Victoria coins. All these items can have a fascination for the even amateur historian are in secured safety in the custodian of the Museum.

In 1987, it was Alain Lucas who was appointed to the noble post of Archivist and Curator of Museum. In 2002, when the Archives and the Museum become two separate departments, Alain Lucas retained the post of Curator. Mr. Alain Lucas was the director of the National Museum until 2008 and was replaced by Cecile Kalebi who directed the division until March 2016. To date Ms. Beryl Ondiek is heading the National Museums.