It is often said that the Seychellois people is a melting pot of races. Indeed, this cliché amply describes the composition of the Seychellois Creole nation. The people of Seychelles represent an ethnic diversity that dates
from the second half of the 18th century. 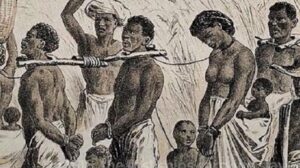 In 1835, when the abolition of slavery came into force in all British colonies, 6,521 slaves were set free from a population of 7,500 inhabitants. This means that the population of Seychelles then must have been predominantly black.
The creoles numbered 2,231, the Mozambique 3924, the Malagasies numbered 282 and the Indians 38. Among them it is certain that many were the founding families of some of today’s generations.
Important dates throughout history of slavery in Seychelles:

1685 – The “Code Noir” was passed by Louis X1V to define the status of slavery in the French colonial Empire.

1770 – The arrival of the first slaves to Ste Anne Island.

1835 – Slavery was abolished in British Colonies. In Seychelles, 6,521 slaves were emancipated.

Between 1861 and 1874 a total of 2,816 liberated African slaves were taken from Arab dhows and brought ashore to Mahé.