Braving the south west monsoon winds, they had sailed from Isle de France under the instructions of a Frenchman named Brayer Du Barre who had received permission to create a settlement in ‘Séchelles’. This came twenty-two years after a French navigator Capt. Lazare Picault (1700-1748) aboard L’Elizabeth dropped his anchor at Mahé on 19th November 1742 and fourteen years after Capt. Nicholas Morphey (1729-1774) aboard ‘Le Cerf’ took Possession of the  ‘Séchelles’ in the name of the king of France, Louis XV on the 1st November 1756. 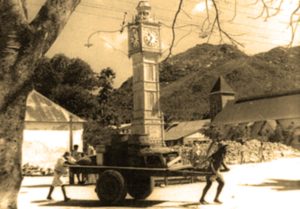 Since the east coast of the island of Mahé was obstructed by mangroves, the settlers established their settlement on Ste. Anne Island, just opposite. This island had been named in 1756 by Nicholas Morphey, in honour of his young wife, Anne Houdman who had passed away in May 1756.

This small group of intrepid settlers were subjected to the trials of hardship and the challenge of survival in the isolation of the vast Indian Ocean. They cultivated food crops: rice, maize, cassava and vegetables. They made coconut oil and they salted fish Emboldened by their first attempt on Ste Anne, at the end of 1771, they moved across to Mahé where they cleared the land and built infrastructures including a small chapel dedicated to St. Antoine de Padua. Indeed their efforts resulted in the creation of the first settlement on Mahe. This was L’Etablissement du Roy which was founded in 1778 by the French Lieutenant Charles Routier de Romainville (1742 – 1792).

Romainville arrived in Seychelles aboard ‘L’Hélène’, with a contingent of soldiers and a number of slaves. Making use of the timber from the forested hills and granite stone that were in abundance, they built a humble and modest settlement comprising of basic infrastructures that served their purpose supremely well during the first few decades of the French period (1778 – 1811). These were: a house for the commandant that measured 30 feet by 12 feet (9metres by 3.6 meters), a kitchen, and a hospital, a lodge to accommodate visitors, a prison and barracks for the soldiers. Later, a house for the doctor, a boatshed, a tortoise pen and an emplacement for artillery were added to the settlement. L’Etablissement du Roy was the typical establishment that one would expect to find at a colonial outpost during the late 18th century when imperial rivalries and expansionist ambitions of colonial powers set the world order.

After Romainville left in 1781, the settlement of L’Etablissement du Roy was governed by a succession of six French commandants who all contributed to its gradual development, until the appointment of the first British Commissioner in 1811.

Today, as we turned back the pages of time, we acknowledge the pioneer spirit and the indomitable will of those first settlers who carved the first chapters in the narrative of our history 250 years ago.